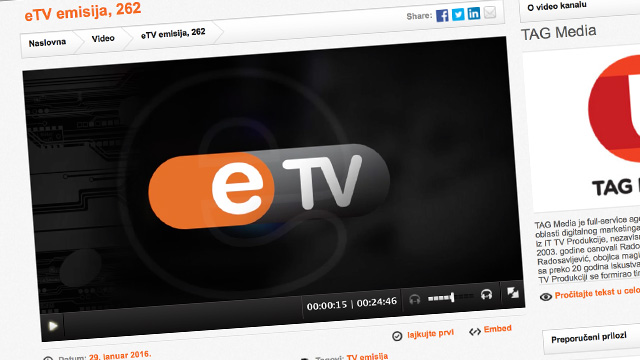 from January 2010 premiere broadcast on RTS 2 Sundays from 12:30 h and is rerun on Tuesdays from 10:00 h, in addition to emissions of weekly broadcasts on the network of local stations in Serbia.

Every week we prepare news from the IT market, IT track of current events, we present the latest software and hardware, brand name computers, websites, mobile phones … What makes this program different from others is access to the original feature announcements that have been made in a semi-humorous played May form , similar to the trend that currently reigns in the world in emissions of this type.

The program that is called is adapted to the target group that monitors program RTS, but are still to information aimed at explaining the new technology to ordinary citizens, to help them improve their quality of life and as soon as possible join the international and European standards, at least when it comes to the internet, computers, mobile phones, e-business and the like. Therefore, in each show we have the original IT topic through which the unique and humorous way demystify misconceptions related to computer use.

IT experts have a regular audience of our program because thanks to reports and contributions we make to the promotion of all the world’s most significant IT innovations fail to follow the trends prevailing in the IT world.

eTV show is more than a decade one of the most watched shows on ICT in Serbia and in that time has received numerous awards.